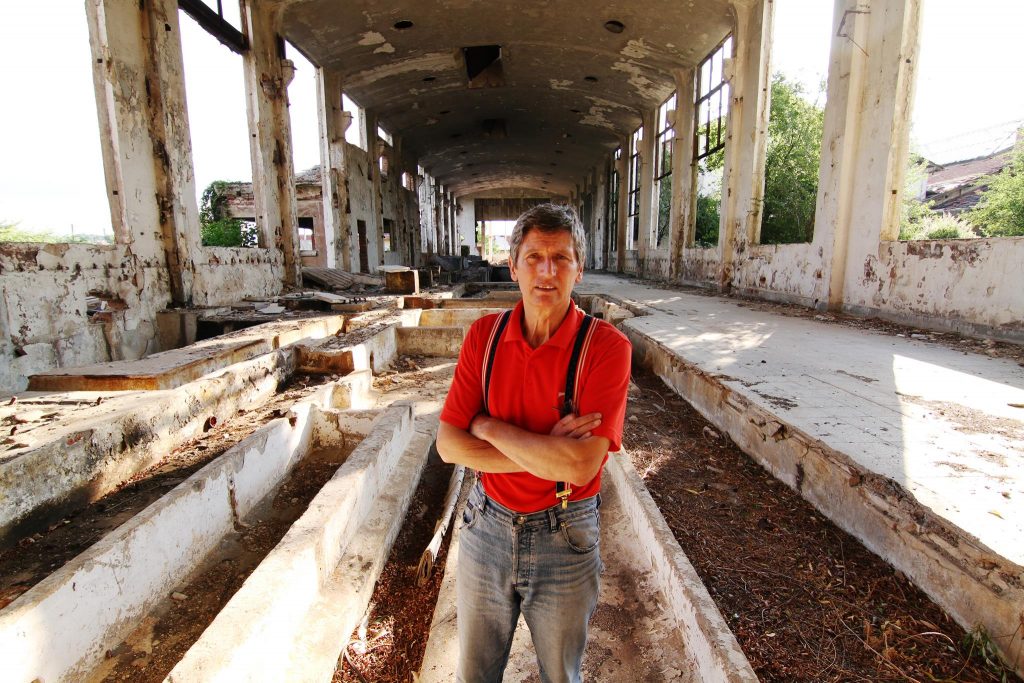 We are in pursuit of methods devised in his expeditions to track the shadows of the past. We compare the past with the reality of the present and we observe it attentively and unobtrusively, when this past engages in a dialogue with the surrounding world. What can still be found in the village are artefacts (remnants of the factory and railways that have been falling apart since their abandonment), photographies of forgotten and already unnecessary ancestors, flawed and dusty remains of a heritage whose value people have no clue about. It is only the desperate dreamer Metody who is able to look under the layers of negligence and ignorance and find out there the treasure that could recover the memory. A rusty nail can make him happy, and he establishes utmost aesthetics in the carving of this same nail’s head. He would usually be confronted with the distrust typical of our compatriots: if someone is interested in a matter, for many it means this artefact is precious and could help earning some money, or a ruder way to put it, they would consider the person to have lost their mind and attack them with ‘Do not mess with your nonsensical stuff, I have so much other things on my mind!’ (more extreme versions are left aside).

The film visualises this transformation of the atmosphere of the time, taking a sight beyond the common observation and adding up the images of various epochs. It is not the usual sociological observation; yet, alike our character, it digs up the sparkles of the past to see their reflections in the present.

This game of real past and ghosted future is among the keys to the film stylistics.”

The story of Metody Panayotov, a man full of thousand stories, gathering their spirit at the Attic Museum in the village of Barakovo of his house. He is not a collector of  solely items  but strengthen the need for collective memory. through his nostalgic and personal memory acts. Piece by piece, brick by brick he tries to revive the forgotten past and remains of the old paper factory of Ivan Balabanov – one of the big entrepreneurs of XXth century from oblivion. Throughout Metody’s various contemporary causes of acquisition of an old locomotive – saved from rust,  preserving old school desks of  closed schools form the nearby areas, his standing to them, we travel from past to modern times with the sincere attitude of his emotions, dreams and ideas. This brings us to the necessity of his next battle and  recalls our consciousness of following his path towards the need of preserving the collective memory. Nostalgia to his childhood when stories and landscape are holding values, memories upon ruins and atop people’s lack of interest. The story narratives bring us to numerous thoughts on the cost of oblivion and how the factory of Ivan Balabanov once being nationalized in 1947 and in 1989 privatized – the act of privatization and the total destruction followed by. It opens the discourse of the necessity to have collective memory in the sake of act of remembrance of history and personal stories. As well it asks the viewer to seek, to avoid oblivion and to be resilient to  economic and political changes. Collective memory is an important function in every society since it preserves and transfers society’s cultural capital, perpetuating its existence. At the same time collective memory is influenced by the content of every dimension of identity, while its national dimension is constructed by the unification of different versions of the past to national memory in each nation. Since collective memory is an instrument of power then scientific professionals of memory should work for its democratization.