Considered a cradle of human civilisation, Egypt has been exposed to and absorbed many different cultures for at least five millennia. Egypt is not only Ancient Egypt; Egypt is Assyrian, Persian, Greco-Roman, Judeo-Christian, Islamic, Fatimid, Mamluk, Ottoman, Arab, African, Middle-Eastern and Mediterranean, in short an epitome of cultural hybridization. It has led to an enormously rich heritage, high tolerance and resilience of Egyptian people.

Similar to other countries emerging from the colonial experience, Egypt went through a series of socio-political crises in the latter part of the 20th century. A conservative strand of post-colonial nationalism has over the years led to decreased tolerance, increased discrimination and traditionalism. In the recent decades Egypt has seen a period of ambitious economic reforms on one hand and rise of radical Islamism on the other. Corruption, curtailed civil rights especially for women and increasing inequality has inevitably led to the Egyptian Revolution of 2011. In the decade that followed, Egypt has been a society in flux, struggling with perennial political and social issues, albeit amidst a thriving cultural scene.

Ancient Egyptians are the founders of the first written language, Hieroglyphs, which is a symbolic language documenting an entire civilization’s history from around 3100 BCE. Iconography and symbols were earliest forms of meaning-creation, which aids the claim for visual language as a strong tool for communication, used for story-telling with emotional insight as often found on papyrus since 2700 BCE. Art and Architecture are symbols of ancient Egyptian history, hence; one may never be able to overlook this civilization when understanding modern and contemporary art in Egypt.

In early part of the 20th century from 1920s to 1956, the more affluent segments of the society were educated abroad, and those who studied art in Europe slowly but steadily introduced modernism to Egyptian art. However, creation of Israel in 1948 led to rising nationalism and dissociation from the West under President Nasser, inspiring a widespread movement to embrace Pan-Arabism in all aspects of culture. This is also reflected in Egyptian art, which took its influence from North African and West Asian/ Middle Eastern cultural motifs. From 1970s, the rise of Islamism can be reflected in Egyptian art through the use of calligraphy and imagery drawn from Islamic history. Since 2000 the art scene in Cairo and Alexandria saw a revival with technology’s impact on art visible through digital, video and multimedia art.

However, the most dynamic spurt of artistic growth came with the Egyptian revolution, which triggered a new public culture. Artists were at the forefront of the protest, with music and street art becoming prominent mediums through which people expressed their sentiments and document the lived experience of the revolution. Some streets such as Mohamad Mahmoud Street near Tahrir Square and Al Gomhuria in Assuit became graffiti hubs, and these were also photographed and circulated widely through social media.

Building on its long and rich visual history, contemporary Egyptian art is diverse and defies superficial and summery categorization. Various schools and groups of artists lead to a dynamic art scene, with highly individualised forms of expression. However, most contemporary art, in one way or the other respond to the identity based social issues present in Egypt today. Artists are, perhaps, unconsciously driven by social limitations, indirectly addressing inner battles, debating what is taboo and what is not, addressing opinions fearlessly yet indirectly, leading to much creative exploration and contemplation. The restricted existence of women is a noticeable topic in in Egypt’s modern artists’ portfolios: many artists have tried to tackle the widespread culture of double standards and misogyny in their art. Other topics involve individual liberty, freedom of expression, religion and history. Thus, politics remains intimately tied to the arts and the state still plays a role in deciding what gets displayed. Contemporary Egyptian art continue to be a constant exploration of Egyptian Identity and the curatorial vision for the collection at WAMM builds on this concept.

History is inescapable in Egypt. Similar to other contexts which base their national identities from long and proud historic narratives Egypt too has a tradition of glorification reflected in its memorialisation efforts: Sadat City, 26th of July Street, Talaat Harb Square, 6th of October Bridge, October War Panorama Museum and Memorial — are constant evocations of persons, places and events raised to iconic status by former regimes. However, the revolution heralded a departure with a new, unsanctioned layer of historical memory being added to Egypt’s cityscapes through graffiti, photography and music. Revolution played a huge role in changing the memory culture in Egypt with art as its key medium of communication; Graffiti filled the streets, photography was printed, used in various designed posters in Tahrir Square, calligraphy, typography were used to honour martyrs and/or document incidents with humour and sarcasm which are integral aspects of Egyptian Culture. Collected by activists, artists, scholars, journalists and ordinary people, millions of scanned photos, documents, oral histories, tweets, films, videos and audio clips portray and preserve alternative views of the tumultuous change and its aftermath. Some material is focused on remembering and honouring injured and dead civilians, while counterrevolutionary forces are fighting back with their own content. Digital technologies are now serving as platforms on which different versions of history and memory do battle daily.

Hybrid Identity is the narrative thread that weaves the collection presented in the Egyptian Gallery. It explores how individual artists have responded to issues of identity, gender, religion and revolution through their art.

In Spaces, Beginnings and Memories 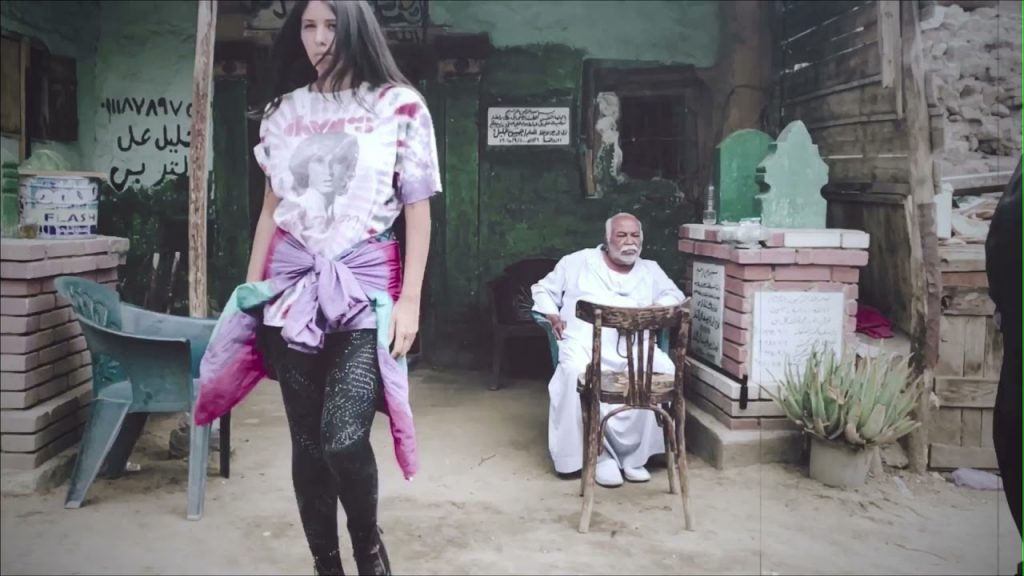