With his 2013 painting and drawing series Moving forward by the Day Hafez continues his artistic concept as an act of protest: “This impetus to disengage and return to the studio reflects his disillusion with the turn of political events in Egypt”(1). What he is resisting in his work, states Hafez, is a public discourse that seeks to unify and impose a single truth or ideology upon the rich and diverse reality of Egyptian identity(2). In Moving forward by the Day I Hafez returns to the iconography of a fashion model cut out from a glossy fashion magazine, digitally reworked and combined with the crown of ancient Egyptian goddess Hathor in order to create once again a hybrid symbolism. Here, Hafez refers to a divine feminine principle, “a complete sacred feminine”(3), oftentimes personified in the form of a major ancient Egyptian goddess such as Isis, Hathor, Bastet or Sekhmet, which may possess different qualities in different contexts linked to their iconography as a human female, cow, cat or lioness. Thus, for instance, Bastet represents the domesticated, rather gentle cat, whereas Sekhmet is a furious and ferocious version of the same feminine principle. Moreover, the figure of Hathor is an indirect reference to Egypt. The cow goddess therefore figures prominently on his canvases, “embodying a particular space that is bountiful, tolerant and nurturing to those who inhabit it”(4). Additionally, the title of the painting series Moving forward by the Day is strongly reminiscent of the title of the ancient Egyptian Book of the Dead, a corpus of spells designed to help the deceased with the several perils of the afterlife as the ancient Egyptians imagined it(5). The comparison of current Egypt with images of the dangerous afterworld attests once more to Hafez’ disappointment with political developments after the 2011 Revolution. 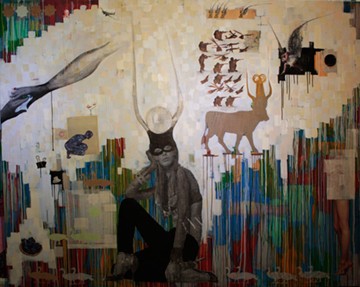 The sniper and military motives, which frequently appear in Hafez’ paintings, also play a dominant role in Moving forward by the Day I. Hafez already referred to these themes before the Egyptian uprising in 2011 giving his artistic concept a notion of prevision in regard to the role of Egyptian military forces within the political transition process. However, they can also contain a collateral meaning. Looking closer at the painting, one recognizes text fragments that appear under and next to the layers of paint. Hafez uses in his paintings pieces of newspapers and journals next to photojournalistic and advertising imagery in order to provide a significant addition to the medium and its meaning and aesthetic. In his multi-media approach Hafez attempts to transcend the limits of the single medium by combining painting with collage. In his artistic strategy, fragments of newspapers serve as sources of information. In much the same way are ancient Egyptian wall paintings a form of delivering information. Their techniques contain a lay-outing of visual elements to create a flat, graphic and kinetic narrative that Hafez adopts in his paintings. He links this form of narration to the function of modern comic strips and comic superheroes such as Batman and Catwoman. Keeping this aspect in mind, the composition of newspaper fragments and military symbols reveals a deeper meaning. Dealing with the function and narration of different kinds of media Hafez criticizes media released imageries and discourses of propaganda and ideology that intends conflict resolution over dialogue.

Besides the large-scale paintings, the series Moving forward by the Day contains for the first time also drawings within the context of an exhibition. In Drawing forward by the Day Hafez uses a line drawing and collage technique to convey a caricature-like image loaded with diverse kinds of symbols and political hints. The silhouette of the ancient Egyptian cow Hathor and the open window represent a possible link to the ancient Egyptian past. Combined with the present, such as indicated by the mobile phone lying on the floor, the drawing suggests once more a continuum and a culmination of the Egyptian identity in layers. The marionette player seems to signify the strata of policy makers who move in the shadow and behind closed doors. But it can equally refer to the nebulous ‘interior’ or ‘exterior forces’, whom today’s Egyptian politicians willingly blame for everything that goes wrong.

(5) The ancient Egyptian name for these texts can be translated as “spells for going forth by the day”, cf. John H. Taylor (Ed.), Journey through the afterlife. Ancient Egyptian Book of the Dead, London 2010. 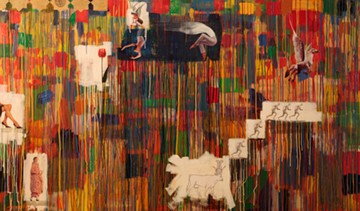 On Code, Symbols and Stockholm Syndrome