I like to work with the enchantment, with the discovery of the role of the women in history…

Marcela Cantuária was born in Rio de Janeiro, Brazil, in 1991. She studied art at the Federal University of Rio and was a resident artist in Guadalajara, México. Her work mixes history, memory and utopia, in a dialogue with social movements and popular uprisings in several countries.

Like many painters of her time, Marcela Cantuária adopted figurativism to transform her ideas, wishes and concerns into pictorial narratives that rescue the richness of painting as an artistic expression, something that many had already declared as outdated in a world dominated by market logic.

But above all, the young carioca painter also rescues the desire of an entire generation for greater sociopolitical engagement in her country, Brazil, where this discourse was interrupted with the advent of dictatorship between the 1960s and 1980s and which some now depart in defending his return, because this was supposed to have been a positive period for the country.

Thus, Cantuárias’s work is not only beautiful and engaged, but also necessary. Because in Brazil the period that comprise the return to democracy, in the mid-1980s, and later years of structural adjustment and some economic prosperity, in the 1990s and in the Beginning of this century, were devoid of a strong and forceful cultural movement.

Perhaps it is the artist herself who gives us the key to understanding her work by saying that the Brazilian dictatorship has driven a whole generation away from politics and that “there is a gap in this country.”

But she goes further. Instead of denouncing the apathy and alienation of society, typical of the followers of Leipzig’s New School figurativism, his gaze also turns to the role of women, rescuing not only narratives of the present but also heroines of the past.

As in the painting “Daughters of the Volcano / Mama Dolores y Mama Tránsito” (2019), where Marcela Cantuária portrays Dolores Cacuango and Rosa Elena Tránsito, feminist pioneers and indigenous rights activists in Ecuador in the early 20th century.

And as in the painting “I Will Return and Be Millions” (2018), where she portrays Marielle Franco (1979-2018), Brazilian politician, feminist, and human rights activist from Rio de Janeiro who was killed in a car along with her driver after delivering a speech in March 2018. This picture hangs today in Museum of Maré, a slum in northern Rio de Janeiro where Marielle Franco was raised.

But Marcela Cantuária’s figurativism is not limited to portraiture or historical painting. As she says, in her work she seeks to create “big narratives”, searching for “meetings with the past, with what is happening now and the future possibilities.”

Therefore her narrative is not linear. And that can be seen on her screens. Marcela uses bold colors and superpositions to carry a much-needed message in Brazil today. She approaches the pictorial accounts of Pablo Picasso and Diogo Rivera, helping to close a gap represented by the absence of mural paintings done by women.

“I was resident artist in Mexico, in the former studio of Orozco, in Guadalajara. The Mexican muralists worked very well the issue of memory, but there is a gap concerning gender, few women created murals. I joined this project of creating big narratives… It is not historical painting, it is another thing. Historical painting just interpret, like a photo of the moment. And in my work I search for meetings with the past, with what is happening now and the future possibilities. I painted a picture of [murdered city councilwoman of Rio de Janeiro] Marielle. There were many collectors who wanted to buy it, but I decide to donate it to the museum of Maré [big slum in Rio] because Marielle was born there. It was my work to be in a museum. A painting is not just an expensive object, like a jewel, it also demands money, a certain infrastructure. I like to work with the enchantment, with the discovery of the role of the women in history… This is also a way of making criticism. The Brazilian dictatorship turned a whole generation away from politics. There is a gap in this country.” 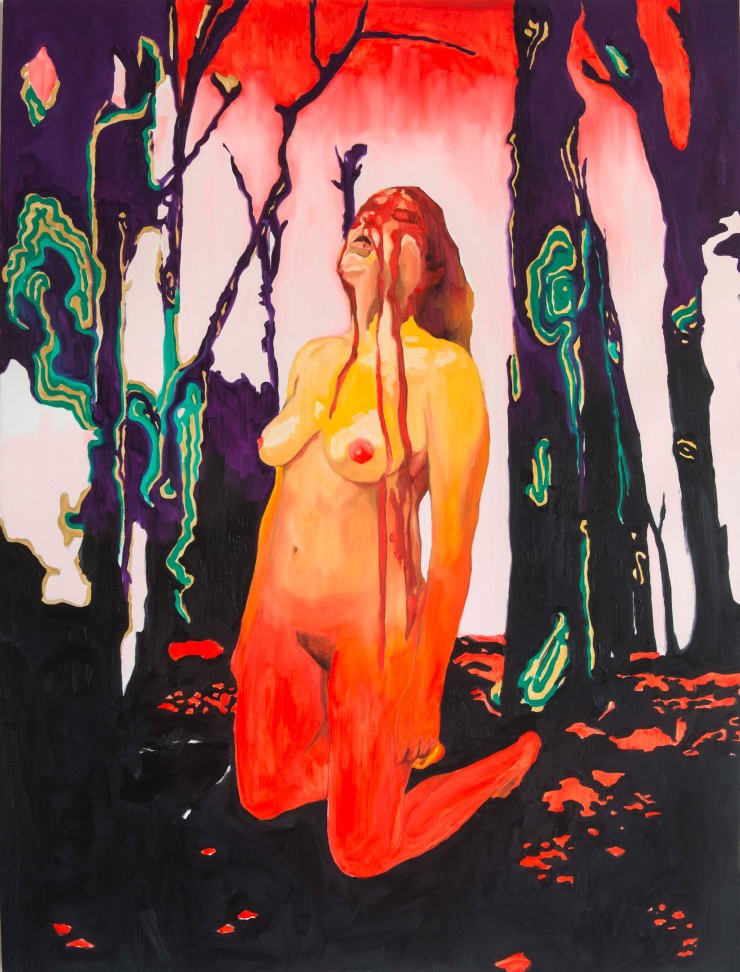